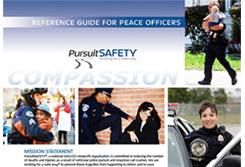 No officer or law-abiding citizen wants it to happen. But when it does, this “Compassion Guide” will help families of victims and the agency involved in the pursuit. During a meeting with PursuitSAFETY’s founder Candy Priano, Commissioner Joe Farrow brought up the concept for this guide. He stated, “With all of the accumulated research and lessons learned, this information needs to be shared with law enforcement and the public.”

Tools and Information
… Age of Innovation and Reform 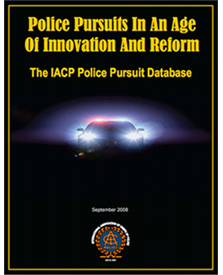 The balance between crime control and safety/liability is a central framework in the discourse on police pursuits and is reflected in police policies, research and practice. However, in addition to these on-going concerns, two equally important and contemporary contexts should also motivate pursuit policy reform and data collection. These contexts include the advent of a new era of policing that emphasizes proactivity, prevention, and problem-solving… . [Complete statement on page 8]

The Las Vegas Metropolitan Police Department received the 2013 PursuitSAFETY Safer Way Award during the Highway Safety Award Breakfast at the IACP annual Conference and Exposition that year. LVMPD spells out its strategy for reducing the number of vehicular police pursuits in the following documents: 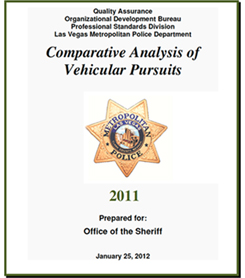 The LVMPD class emphasizes that crimes warranting risky vehicular pursuits must meet a clear threshold of threat to the public: the fleeing driver must have committed a violent felony and officers must have no “safer alternative” for apprehending the suspect. With officers trained to meet this standard, the number of pursuits in 2012 dropped to 34, a 41% reduction in three years.

The department implemented a training program for higher-ranking officers, focused on listening to and analyzing radio dispatches between duty officers and their supervisors. The training helps supervisors identify the information that needs to be communicated as potential pursuit scenarios unfold.

Control, I am in pursuit… 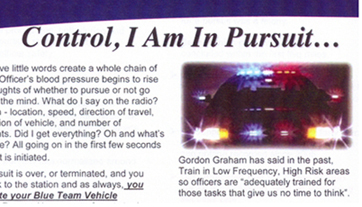 The LVMPD policy has not resulted in an increased crime rate, Lt. John Farrell said. “We are still capturing about 80% of all drivers who run from police,” he stated, adding that when helicopter support is available, “we catch suspects 90% of the time, regardless of whether we pursue or not.” To illustrate how air support helps, Lt. Farrell cited the capture of a car theft suspect who failed to yield to an officer. The officer disengaged and called in air support as the suspect continued on his way at normal speeds, stopping at traffic lights. Tracked to an auto dealership, the suspect was arrested after he bailed out of the stolen car and attempted to flee on foot.

Lt. Farrell explained to PursuitSAFETY that the training program is regularly updated and refined. “The LVMPD Pursuit Review Committee looks at every pursuit, not for discipline reasons, but to identify training issues or concerns that need to be addressed,” he wrote in an email. “These training issues are then put into the Pursuit Awareness course or bulletins to officers and discussed at length. The whole purpose of the course is to ensure that police officers are receiving up-to-date relevant training on pursuits and their driving ability.”

Police Pursuit Training by IACP from Jerry Miller on Vimeo.

PursuitSAFETY® serves families from around the world. Candy Priano, the organization’s founder, is also the victim services director because that’s where she says, “my heart lies.” Send Candy Priano an email: candy.priano@pursuitsafety.org.

PursuitSAFETY’s speakers—career officers and civilians—reach out to a variety of audiences: police officers, teen drivers, and the public. They’ve spoken at law enforcement conferences, community centers, churches, and universities. We share our stories about the tragedy of innocent lives killed and permanently injured as a result of violent pursuit crashes.