We watch movies and video games that glorify the ultimate police chase. Everyone is on the edge of their seats hoping the protagonists ditches the police, dodges the busy streets and comes out victorious! It’s simple, in Hollywood movies, video games, simulations, etc. you can always walk away. In real life, police chases often end in violent crashes that kill, paralyze, or disfigure those who flee and innocent victims nearby. You can’t turn off the TV, pause the game, or walk away. This is real life. That is why it is essential to remind young adults or teenagers getting ready to drive about the importance of taking being pulled over by police seriously. Bandura’s Social Learning Theory argues that people learn and develop ideas from observations, modeling, and imitation. This said, younger generations are surrounded by new film technology that includes awesome CGI, graphics, animations and anything else that can transform an unfortunate chase scene into something “hard-core” and “EPIC.” This can be misleading especially to young adults starting to drive. These films are telling the story that police chases are cool and even more so if you get away and outrun the cops! “Fast and the Furious,” “Need for Speed,” and “Dukes of Hazard” are only a few of the 1,000-plus films that contribute to glorifying police chases. Seeing these films over and over can have the effect of making someone feel invincible on the road. Especially after seeing a leading character hit a police car, roll their vehicle multiple times, land in a lake and walk away without a scratch. This isn’t realistic, and it is imperative we are reminded of that. Too often the person killed isn’t the person fleeing, but an innocent victim that is usually a brother, sister or a best friend. 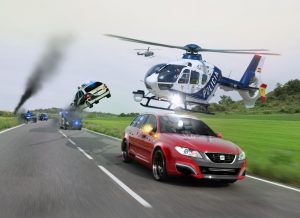