PursuitSAFETY assists families in person and in our courts. During November and December 2018, Richard Hendrix, Finch McCranie, LLP of Atlanta, wrote the PursuitSAFETY Amicus Brief on behalf of the family of Luis Gonzalez, an innocent bystander killed as a result of a Kentucky pursuit crash. The Kentucky Supreme Court accepted his brief. Here’s the story:
Know More 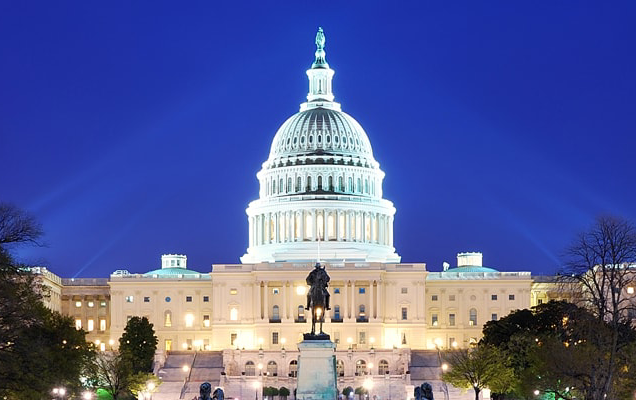 A Big Win for Safety & Accountability

In a 6-1 ruling, the court held that a jury should consider whether a Scott County deputy sheriff was negligent when he pursued a suspect who crashed head-on into Luis Gonzalez, killing him.

“We at PursuitSAFETY appreciate being able to participate in this effort to fix Kentucky’s immunity law pertaining to vehicular police pursuits. This effort aligns with our mission to prevent the tragedy of pursuit and save lives of innocent bystanders and police officers,” stated PursuitSAFETY founder Candy Priano.

Richard Hendrix, an Atlanta-based attorney, was the author of the PursuitSAFETY amicus brief accepted by the Kentucky Supreme Court in support of the appeal filed by Garmer & Prather, PLLC of Kentucky. Jerome Prather wrote, “The Court cited statistics from PursuitSAFETY’s amicus brief in its opinion.”

Hendrix stated, “Increased accountability will save lives in Kentucky.”

The Courier Journal reported in April that Deputy Jeremy Johnson chased a suspected heroin dealer into Fayette County on a rainy night, realizing in mid-pursuit that his siren wasn’t working. State law requires police to use their lights and sirens during a pursuit. The suspect crashed into a car in which Gonzalez was a passenger, killing him and causing fatal injuries to the driver, Geneva Spencer.

A trial judge summarily dismissed a wrongful death suit filed by Gonzalez’s estate, citing a 65-year-old case brought by the driver of a horse-drawn milk truck whose wagon was cut in two by a fleeing suspect chased by police in Owensboro.

Kentucky’s high court ruled in 1952, “Police cannot be made insurers of the conduct of culprits they chase.”

On June 13, 2019, the Kentucky Supreme Court, however, overruled that opinion, by changing the state law and held that there is a jury question on liability in police chase cases where the fleeing suspect caused the injury.

Gonzalez’s son sued the Scott County Sheriff’s Office over the Jan. 14, 2014, collision, saying his father, a widower with six grandchildren, would still be alive if not for the unlawful chase.

The Supreme Court of the United States

The U.S. Supreme Court ruled 6-3 that the Fourth Amendment prohibits the use of deadly force to prevent the escape of any fleeing suspected felon unless the suspect poses a “significant threat” to the officer or the community and other means have been exhausted. A 1990 report on police pursuits for the NIJ says: “Under Tennessee v. Garner, it is clear that force must be proportionate to the danger the fleeing person represents.”

In December 2019, attorney Timothy Rumberger wrote to PursuitSAFETY. He is the pro bono counsel for William Riley, an innocent bystander, who was severely injured when struck broadside at over 80 m.p.h. by a teenager being chased for ten miles by nearly a dozen Sheriff’s officer vehicles in pursuit traveling northbound in the southbound lanes through heavily populated city streets—without air-support, in disobedience of commanding officer orders, and absent a statutorily compliant policy—to apprehend a juvenile girl for a nonviolent property offense: she walked out of a Safeway, two cities away, with milk she had not paid for.

Thank you so much for your amicus curiae support of the Petition for Review in Riley v. Alameda County Sheriff’s Office. The effort challenging dangerous high-speed pursuits in the courts, and toward better legislation protecting public safety, continues. But this battle has come to end. Last week the California Supreme Court denied review, notwithstanding the opinion of Associate Justice Goodwin Liu that “review should be granted” as to the undisputed failure of the Alameda County Sheriff’s Office to train in compliance with the statute.

PursuitSAFETY and "Kristie’s Law": Letters are below. They Support the Petition for Review of Law Enforcement’s Immunity Shield Law in Pursuits when Officers Do Not Follow Pursuit Policy

Excerpt from the letter:
To the Honorable Justices of the Supreme Court of California: I am Esther Seoanes, an acute-care nurse practitioner in Austin, Texas. In my work, it is essential to me that I provide the best possible care to my patients, to improve their overall health with the goal of restoring them to their pre-acute illness phase. My job is demanding, but it provides me with great pleasure and fulfillment to guide my patients back to their baseline health.

In my profession, I frequently see death. I also see the pain in the faces of family members of deceased patients. My life, which had always been on this safe side of the world, changed very suddenly on June 15, 2012, when a vehicular police pursuit of a shoplifter crashed into my husband, James Williford, killing him[…]

I close by reiterating how important it is to me that I provide the best possible care for my patients. In my work, as in most professions, I must follow hospital policy; it is literally a matter of life or death. I beg the court, in Kristie’s name and on behalf of all the innocent victims of California, to please require officers to follow their pursuit policy.

Excerpt from the letter:
To the Honorable Justices of the Supreme Court of California: Kristie’s Law became a national grassroots organization in 2003 to support the true victims of police pursuit crashes: innocent bystanders and their families. Kristie’s Law is dedicated to the public interest in promoting safe law enforcement vehicular pursuits. We partner with PursuitSAFETY, a national 501(c)(3) nonprofit organization I founded in 2007, based in California.

One minute, Kristie was a 15-year-old honor student and community volunteer, laughing with her brother in the back seat of our family minivan on the way to play in her high school basketball game. The next, she was one of the hundreds who die each year across the nation from violent crashes caused by police pursuits of nonviolent suspects. More than one-third of those killed are innocent bystanders—just like Kristie.

Justice Rylaarsdam described my experience quite well in Hoa Nguyen et al. v. City of Westminster, writing, “The adoption of a policy which may never be implemented is cold comfort to innocent bystanders. We do not know if the policy was followed in this instance, and that is precisely the point: We will never know because the defendant did not have to prove police officers participating in this pursuit followed the policy.”
On behalf of Kristie’s Law and the many, many victims of police pursuits I continue to meet and support, I implore the Court to thus please consider reviewing Riley v. Alameda County Sheriff’s Office, to address a defect in the law which has cost hundreds of lives.

PursuitSAFETY funded expenses for six family members of innocent victims to travel to Capitol Hill where they brought our cause to the national level (pictures below). They spoke with legislative aides who represented legislators holding positions on the Judiciary Committee. To our knowledge, we were the first victims’ advocacy organization to go to The Hill and ask that the U.S. Congress include “pursuit reduction technology” in federal law enforcement grants. Specifically, we asked that the legislators include pursuit reduction technology in the Byrne Grant and COPS technology funding for police. As with many legislative requests, we continue to follow up on the status of getting this wording into the grants. We also look to law enforcement to support us in this endeavor. 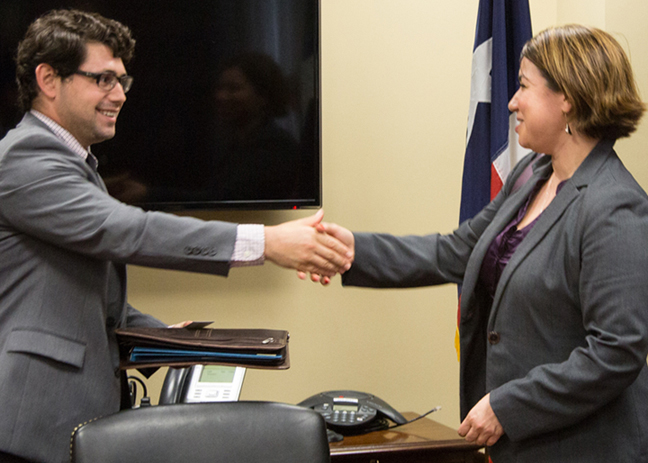 Adam Shapiro, Texas legislative correspondent for U.S. Senator John Cornyn, thanks Esther Seoanes of Austin for explaining how pursuit reduction technology might have saved her husband James’ life and for her work at PursuitSAFETY. 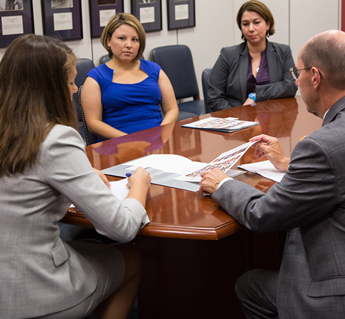 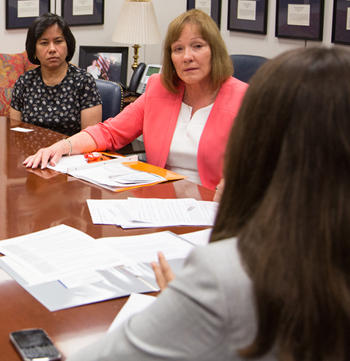 Maria Ipiña of Dallas and Candy Priano listen to Lisa Kaplan after the two victims’ advocates explained the frustration of both civilians and law enforcement because of declining budgets that hamper LE’s ability to test and adopt these technologies. That’s why adding “pursuit reduction technology” to existing grants is a win-win for all of us. 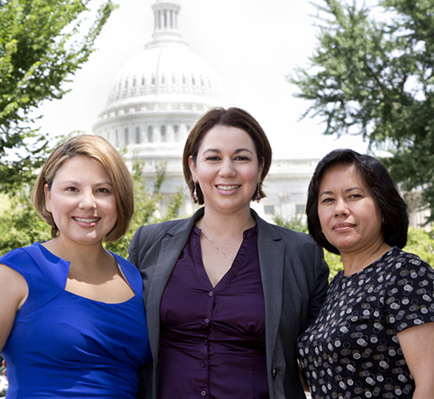 PursuitSAFETY supports federal and state legislation designed to strike a proper balance between the rights and expectations of innocent bystanders against the need for inherently dangerous vehicular police pursuits and response calls to apprehend nonviolent suspects.

Outreach to Legislators and Policymakers

Update: We did not receive a response from the Attorney General, but we continue to support technology that will provide law enforcement with the tools they need to apprehend suspects in a safer way. We look forward to the day when the use of technology begins before there is even a chase, given that most deadly crashes happen within two to three minutes of a pursuit.